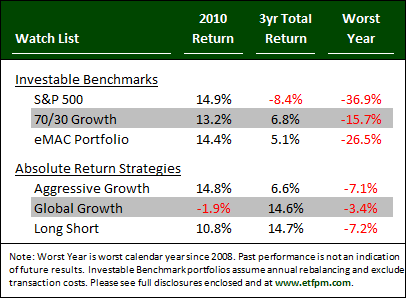 January 2011 To Our Clients and Prospects: In 2010, the momentum in emerging markets shifted to Hong Kong and Malaysia, while precious metals and

Investment Lessons You Need to Know By David Kreinces, ETF PM (5/10) The ‘90s were one of the best decades in history for the S&P 500. The main

Fixing the crisis: Give back to school By David Kreinces, ETF PM (1/28/10) Which crisis? Unemployment, housing foreclosures, healthcare reform,

ETF firm to donate 15% of its fees BY PENSIONS & INVESTMENTS | JANUARY 25, 2010 ETF Portfolio Management LLC plans to give back, a little at a