Ethereum just had its sixth birthday (July 30th), and the world’s second-largest cryptocurrency had much to celebrate! Ethereum had a market capitalization of $275 billion and it returned over 234,000% since inception. 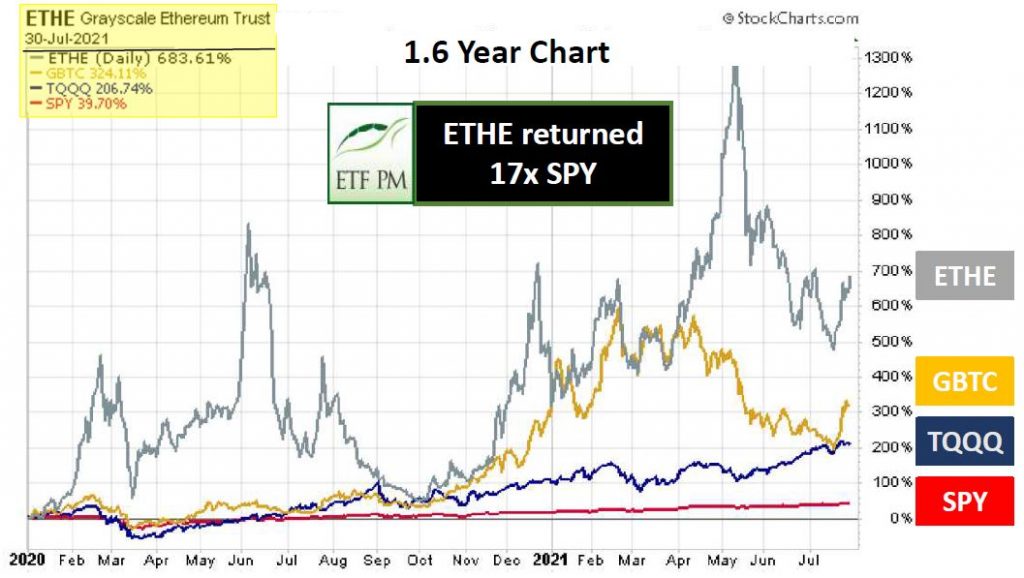 In fact, Ethereum has actually been growing faster than bitcoin for many years due to Ethereum’s larger number of uses, and greater capacity to adapt. Over the past 1.6 years, the Ethereum Trust (ETHE) returned 684% which was 17x the S&P 500 return, and more than double the Bitcoin Trust (GBTC) gain. 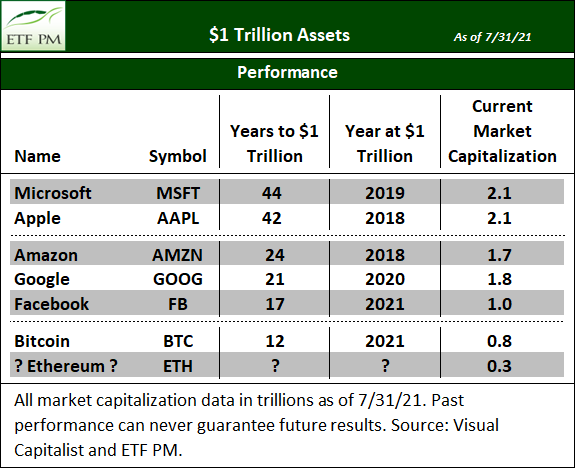 In order to put Ethereum in perspective, consider the assets that hit a $1 trillion market capitalization. It took Apple and Microsoft over 40 years to reach $1 trillion, Google and Amazon needed more than 20 years, and Facebook got there in just 17 years.

However, in April 2021, Bitcoin shattered the world speed record to $1 trillion, passing this illustrious mark in just 12 years. As a result, many investors are now glued to their quote screens, watching to see if, or when, Ethereum will set a new record in joining this group.

ETF PM has long positions in ETHE and GBTC.

The leading altcoin has seen its price appreciate by over 234,000% since its launch and had a market cap of $275 billion at the time of writing.

The decentralized open-source blockchain was first introduced to the world in a whitepaper by Vitalik Buterin in 2013 before it was officially launched two years later.

Most notably, Ethereum pioneered the concept of executing smart contracts on the blockchain. It also introduced the ERC-20 token standard, wherein other crypto tokens could be built on top of the Ethereum blockchain.