Below, see the performance of the Buffett & Swensen ETF portfolios versus the S&P 500, long-term Treasury bonds, and the investable benchmarks: 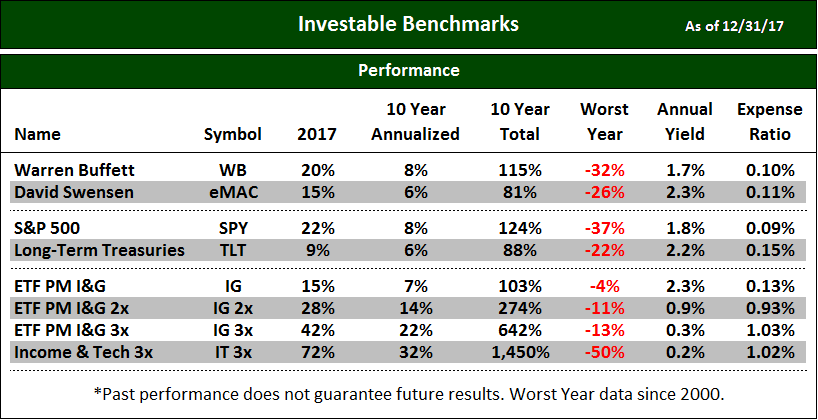 Over the past decade, the Buffett & Swensen ETF portfolios delivered 8% and 6% annualized, or 115% and 81% in total return. These unleveraged growth portfolios significantly underperformed the investable benchmarks in total return and risk.

Over the past decade, both the S&P 500 (SPY) and long-term Treasury bonds (TLT) delivered annualized returns of 8% and 6% as well. However, neither Buffett nor Swensen recommend an allocation to TLT even though the asset class has historically delivered critical portfolio protection.

Given the strong growth in technology and automation, we launched Income and Tech 3x (IT 3x) for aggressive growth investors, and we predicted a mega stock market bubble ahead. Over the past decade, we estimate that IT 3x returned 32% annualized or 1,450% in total return.

However, IT 3x and the other investable benchmarks may be extremely volatile at times. These portfolios are available through a range of passive and active asset allocations, and we encourage investors to engage leverage slowly and to employ ETF PM’s overriding risk controls.

In 2013, Bridgewater’s All Weather portfolio returned -4%, while IG 3x gained 29%. Many investors are now employing leverage in risk parity including AQR, and BlackRock, the world’s largest asset manager.

Still, investors must be mindful of the risks, regulatory issues, and misunderstandings concerning leveraged ETFs. As per Greek philosopher Heraclitus, “Life is Flux” meaning “all things change.”