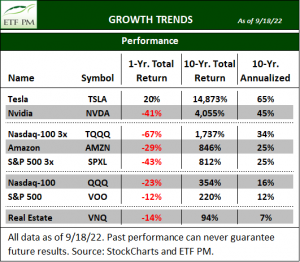 We were early back in 2013 when we said Elon Musk was the “world’s top genius.” Last year, Musk’s side hustle SpaceX helped to launch a new space tourism industry, Tesla’s Model S Plaid became the first production car to “break the two-second barrier,” Tesla’s market capitalization hit $1 trillion, and his neuroscience company Neuralink enabled a rhesus monkey to 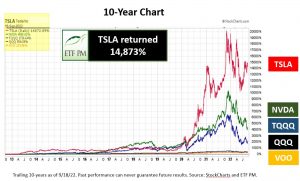 This year, Musk continues to revolutionize new markets including utility power services, auto insurance, robots, broadband communications, and perhaps even smartphones at some point. Tesla has also made great progress with customers including Hertz, Uber, and a growing list of police departments.

There have been many reports of Tesla’s unprecedented demand and even used car appreciation in some cases. Given the extreme market volatility, ETF PM has been investing defensively with long exposure mostly in cash, energy, and Tesla (TSLA).

Tesla is currently facing an “unprecedented demand,” according to a Wall Street analyst after a visit with management at Gigafactory Berlin.

Despite the price for its electric vehicles going up significantly this year, there have been many indications that Tesla is experiencing strong demand. We reported on Tesla’s order rate surging to record highs in the US when gas prices went up earlier this year. Tesla even stopped taking orders on some versions of its vehicles because the backlogs were becoming too long.